A recent study finds that median home prices have increased at four times the rate of household incomes since 1960. Another study finds the share of first-time homebuyers in the number of total sales has dropped from 50% in 2010 to 33% in 2018.

Zillow’s own research from 2018 predicted the median home price would reach $1 million in 200 cities this year.

Home values have outpaced incomes, making down payments a barrier for many, particularly first-time home buyers. Between 2009 and 2018, the median price of an entry-level home has risen faster than home prices in the move-up buyer segment, according to research from Point2 Homes. Currently, a first-time homebuyer needs to pay 31% more for a home, compared to a repeat buyer, who is looking at a 25% increase. On a positive note, the price gap between starter homes and homes purchased by repeat buyers is slowly closing, going from 31% in 2009 to 27% in 2018.

However, down payments are a challenge to afford for many. A recent Zillow analysis found that buyers need 1.5 years longer to save for a 20% down payment on the typical home than 30 years prior, and the difference is much more extreme in the most expensive metros – 13.3 years longer in San Jose, for example. 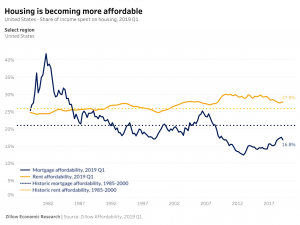 But new research from Zillow finds housing is becoming more affordable. Households including at least one person with a high school diploma or GED can afford the typical mortgage payment in most large metro areas across the U.S., but there have been challenges, for sure.

“The influx of highly educated workers into already-expensive metros with stagnant or slow-growing inventory has made it difficult for those with less education and earning potential to enter those markets,” said Skylar Olsen, director of economic research at Zillow. “There can also be considerable variation within metros. While a bachelor’s degree may be enough to afford a mortgage on the typical home in the San Diego metro at large, it’s likely to be insufficient in pricey areas like La Jolla. And that’s only after scraping together a sizable down payment, which is a huge hurdle for most buyers.”

For households that secure a down payment, the median mortgage payments are affordable for those with a high school education in 36 of the 50 largest U.S. metros. The remaining 14 metros require earnings associated with at least a two-year associate’s degree.

The median income of a university degree holder is necessary to afford the median mortgage payment in the five most expensive West Coast metros. A bachelor’s degree is typically needed in San Diego and Seattle, while the typical income of someone with an advanced degree is required in San Jose, San Francisco and Los Angeles. The typical mortgage payment is affordable for those with associate’s degrees in Boston, New York, Sacramento, Washington, D.C., Denver, Portland, Riverside, Salt Lake City and Miami.

This is in keeping with the research from St. Louis-based Clever Real Estate, which asserts in its study that “the nationwide price-to-income ratio hasn’t been at a healthy balance since the 1990s.” That said, regional variations offer hope for the Midwest, said Clever.

“There’s almost no gap between rental and household income growth rates, so Midwesterners can save for their down payment and afford the median mortgage payments in their cities.”