All Eyes on Millennial for National Homeownership Month

Millennials are increasingly eyeing homeownership, and many players want a piece of their business.

At least one mortgage provider, Chase Home Lending, is targeting millennials in particular. Chase recently released results from a new study, “Readying to Buy: First-Time Homebuyers Share Motivation & Willingness to Purchase.” The study looked to better understand millennials’ urgency to buy a home, lifestyle adjustments they’re willing to make to prepare for that big purchase, and their general perception of homebuying.

As a group, millennials boasts a strong desire for ownership and remains committed to achieving their home-purchasing goals. Chase said its “Readying to Buy” study further supports this attitude, as the majority of those surveyed expressed willingness to make tactical and intentional lifestyle changes, or swaps, if it would help set them up to buy a home in the very near future.

Seventy percent of millennial first-time homebuyers surveyed are willing to cut back on weekend activities such as shopping, going to the movies and splurging at the spa to once per month if it meant they could purchase a home in the next 12 months. The data also revealed that women, specifically, are incredibly determined and empowered to adjust their lifestyles in order to pave a more positive, achievable path to homeownership—71 percent of female respondents surveyed noted they’re willing to limit eating and drinking out to once per week if it set them up for homebuying success in the next 12 months. 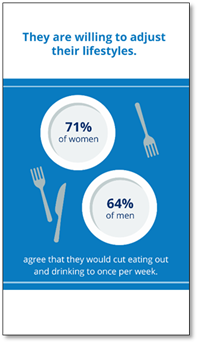 Contrary to national sentiment or assumption, the Chase study found that the majority of millennial first-time homebuyers surveyed (52 percent) feel financially ready to buy a home. Even while juggling various financial priorities or obligations—including paying off student loans and improving credit scores—the vast majority (93 percent) know that homeownership is on the horizon and feel either excited or hopeful about the homebuying process. Additionally, the desire to own their own space, familial changes (e.g., marriage or having a child) and investments/wealth building were ranked as the top three motivators to buy.

Millennial respondents also express determination and confidence when asked about their perceptions of a home search. Nearly half of those surveyed said they feel confident about their knowledge of the home-financing process as well as the upkeep and maintenance that comes with a residence.

According to Redfin, a typical aspiring first-time homebuyer could save a down payment three years faster under one senator’s proposal to cancel up to $50,000 of student loan debt per person, according to a new analysis of student loan and home price data.

The Redfin analysis looked at a typical potential first-time homebuyer earning the national average salary of $65,879 for the Census Bureau’s 24-44 year old age bracket, with an average of $17,938 in student debt, based on data from Lending Tree. If said potential homebuyer spent 10 percent of her income ($549 per month) on debt repayment at the average 5.8 percent interest rate, it would take 3 years to pay off the student debt.

Tackling the challenge of buying a home from another perspective is the National Association of Home Builders (NAHB).

NAHB noted that despite lower mortgage interest rates, housing affordability is relatively the same as it was a year ago. The NAHB/Wells Fargo Housing Opportunity Index found only 61% of new and existing homes were affordable to a typical household. The current homeownership rate (64.2 percent) remains below the 25-year average rate (66.3 percent), according to the Census Bureau’s Housing Vacancy Survey (HVS).

National Association of Home Builders Chairman Greg Ugalde, a builder and developer from Torrington, Conn., said the trade organization is focusing on regulatory barriers that contribute to the increased costs of housing.  NAHB analysis shows that regulatory requirements alone account for 25 percent of the price of a single-family home, and 30 percent of the cost of a multifamily development. In addition, a shortage of construction workers and tariffs on building materials have had detrimental effects on housing affordability.

In White House statement, President Donald Trump reiterated his support for a widely anticipated plan to reform the housing finance system to promote competition in the housing finance market, but also preserve the 30-year, fixed-rate mortgage for qualified homebuyers.