New Housing Starts May Finally be Rebounding, According to a Trade Group for Builders

“The aging of the housing stock has been a boon to the remodeling industry,” says a researcher from Harvard Joint Center for Housing Studies.

As homebuilding has struggled to meet the nation’s growing housing needs in the years since the Great Recession, spending on improvements and repairs to both owner-occupied and rental properties has increased by more than 50 percent, according to Improving America’s Housing 2019, a new report from Harvard Joint Center for Housing Studies. The report found that the home remodeling market hit a record of nearly $425 billion in 2017.

“With new construction slowly recovering from historic lows, 40 percent of the country’s 137 million homes are at least 50 years old,” said Abbe Will, associate project director in the Remodeling Futures Program.

“The aging of the housing stock has been a boon to the remodeling industry, with spending surpassing investment in homebuilding every year for over a decade, and contributing 2.2 percent to U.S. economic activity in 2017.”

The steady uptick in house prices in many markets and the aging population are also driving increased spending on home improvements and repairs. Rising prices mean growing home equity, which provides owners both the incentive and the means to undertake more and larger projects. Additionally, older households have higher homeownership rates than younger households, and many have the resources to afford major renovations, including accessibility modifications that allow them to remain safely in their homes as they age. Households 55 and over account for half of all improvement spending by homeowners today.

The Harvard Center researchers found that younger households contribute significantly more to local improvement spending in many metros across the Midwest and the South, where owning is more affordable than in high-cost metros on the east and west coasts.

Another factor that will affect remodeling activity is the need for housing for an aging population. 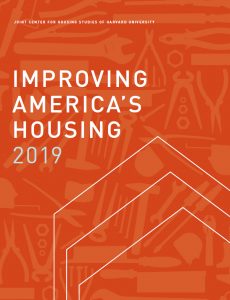 “Over the next decade, the strong preference of older homeowners to age in place and the increasing difficulty of building affordable housing in many markets will continue to hinder the construction of new homes,” said Kermit Baker, director of the Center’s Remodeling Futures Program. “The remodeling industry will, therefore, retain its critical role in helping the country meet its housing needs.”

While the nation’s existing housing stock undergoes renovations, new construction is just beginning to turn around, according to recent government data. Total housing starts rose 18.6 percent in January to a seasonally adjusted annual rate of 1.23 million units from a downwardly revised reading in December, according to a report from the U.S. Housing and Urban Development and Commerce Department.

“The bounce back in single-family starts mirrors our builder confidence surveys, as sentiment fell in the latter part of 2018 but rebounded in January after mortgage rates showed a notable decline,”

-Greg Ugalde, chairman of the National Association of Home Builders (NAHB) and a home builder and developer from Torrington, Conn.