Understanding an agent’s career path and productivity is key to your recruiting and retention plan.

Understanding agent career progressions is key to managing a brokerage’s agent pool. This is one of the many areas in real estate where conventional wisdom dominates. We can now check these industry assumptions by looking at what the data says.

At Relitix, we used a data set consisting of nearly 200,000 active agents in markets throughout the country to examine agents’ careers and productivity over time. While many of the findings confirm common sense and widely held views on agents, others might be more surprising.

It takes agents a few years to get up to speed When we examine the trend line in production for newly commissioned agents, there is a clear pattern that emerges. The typical agent sees production grow rapidly through and around year three or four, at which time productivity growth begins to slow. The highest year-over-year growth occurs between years one and two as the agent becomes more comfortable with their new profession and prospecting efforts begin paying off. Very few agents achieve their short-term potential in less than three years.

Keep in mind that this applies to agents who last three to four years. You can count on 20% to 30% of all licensees leaving the business entirely before their third anniversary, although much depends on the licensing cost and structure of the licensee’s state.

They aren’t going to see any money for a while Licensees in Phoenix, Arizona, did not see their first closed transaction for an average of 120-160 days after they received their license. Remember, this three- to four-month lag time can be longer as well. Many agents don’t record a closing for over a year.

There is a long washing-out period for new licensees

A look at the ARMLS data covering the Phoenix market gives us a sense of the rate at which agents leave the business. The graph below shows the normalized MLS participation rate—a measure of how many of the original class of licensees are still recording transactions. Note that the curve increases from year zero to year one reflecting a number of licensees who took over a year from licensing to appear in the MLS record. After that point, the curve drops rapidly from year one to year 15, labeled Region 1. This tells us a few important things:

How do we interpret this? For many people, real estate is a transitional career. They sell real estate for a while between one job and the next. We know that a 100% commission job can be a hard and demanding way to earn a living. 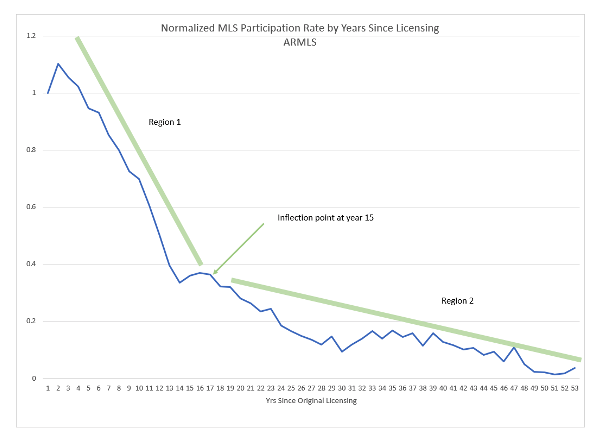 Something interesting happens when real estate professionals spend 15 years in the business. At that point (Region 2), the rate of loss drops dramatically. Once an agent has celebrated their 15th year in real estate a magic number has passed—they chose real estate as a career and are likely to retire in real estate.

Beware of the agent selling less than $1 million

We also looked at what factors made an agent likely to leave real estate. There’s no ground-breaking insight here: Dropping production is by far the strongest predictor. Agents who left the business posted a much lower median annual production than those who stayed in business ($434,500 vs $1,646,500). Fully 35% of agents in our nationwide sample who closed less than $1 million in the year ending Aug. 31, 2019, recorded no volume whatsoever in the following 12 months. That percentage rises to 42% for agents closing less than $500,000 in volume.

Survival of the fittest

While agents’ production rises sharply through years three and four, they don’t reach a steady-state level at that point. When we look at the average productivity of agents in Phoenix and Wisconsin over time, a fascinating trend appears. In both states, agent productivity, measured in closed volume, continued to increase for at least the first eight years. This is the same time frame where agents are exiting the business at a steady and relatively high rate. Add to the mix the increased likelihood for low producers to leave the business, and the picture is complete. We are seeing selection bias in action: The agents who stay in business year after year tend to favor those of higher production. The lower producers are winnowed out leaving a group who has more higher producers than they did in the prior year. In this way, the average production increases over time. 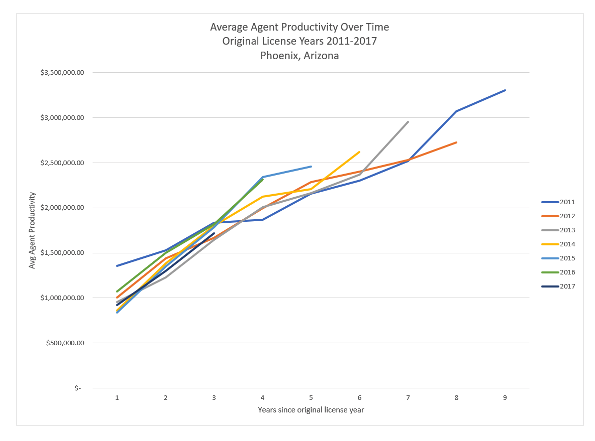 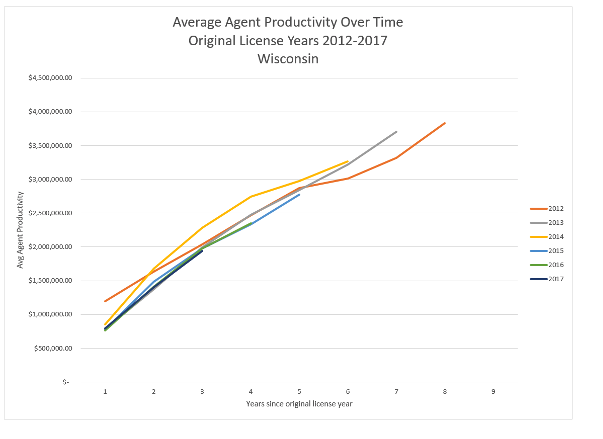 What does this mean for brokerage management?

New agents are going to take a while to get paid. How long? The statistics suggest that the first dollars won’t come in for three to four months, and it could take a couple of years to make a steady income. Brokers should make sure new agents are aware of the realistic timeline and have the savings or outside income to support themselves during this transition period.

Expect steady attrition of agents from the business. Nearly 20% of all real estate licensees will exit the business every year. Newer agents and low-producing agents will leave at higher rates. Factor this into your recruiting and retention planning.

Long-tenured agents (those with over 15 years in real estate) have an established track record and are much less likely to leave. Having a core of such agents in the brokerage will build year-to-year stability.

Any agent producing less than $1 million in a year is at increased risk of leaving. If this agent has what it takes to succeed in the business, don’t delay in intervening to help turn things around.

Without the addition of new agent recruits, your agent pool will steadily grow smaller with fewer, more productive agents. As a rule of thumb, count on recruiting 15% to 20% of your total headcount annually to keep your numbers level. These recruits can be a mix of new people to the business and experienced agents from other brokerages.