Markets are still suffering from lack of inventory, despite uptick in January, says the National Association of Realtors.

Existing-home sales experienced a minor drop for the third consecutive month in January, according to the National Association of Realtors®. Of the four major U.S. regions, only the Northeast saw an uptick in sales activity last month.

Lawrence Yun, NAR’s chief economist, says last month’s home sales of 4.94 million were the lowest since November 2015, but that he does not expect the numbers to decline further going forward.

“Existing home sales in January were weak compared to historical norms; however, they are likely to have reached a cyclical low. Moderating home prices combined with gains in household income will boost housing affordability, bringing more buyers to the market in the coming months.”

Yun notes that this median home price growth is the slowest since February 2012, and is cautions that the figures do not yet tell the full story for the month of January. “Lower mortgage rates from December 2018 had little impact on January sales; however, the lower rates will inevitably lead to more home sales.”

Total housing inventory3 at the end of January increased to 1.59 million, up from 1.53 million existing homes available for sale in December, and represents an increase from 1.52 million a year ago. Unsold inventory is at a 3.9-month supply at the current sales pace, up from 3.7 months in December and from 3.4 months in January 2018.

While total inventory grew (on a year-over-year basis) for the sixth straight month, Yun says the market is still suffering from an inventory shortage. “In particular, the lower end of the market is experiencing a greater shortage, and more home construction is needed,” says Yun.

“Taking steps to lower construction costs would be a tremendous help. Local zoning ordinances should also be reformed, while the housing permitting process must be expedited; these simple acts would immediately increase homeownership opportunities and boost local economies.” 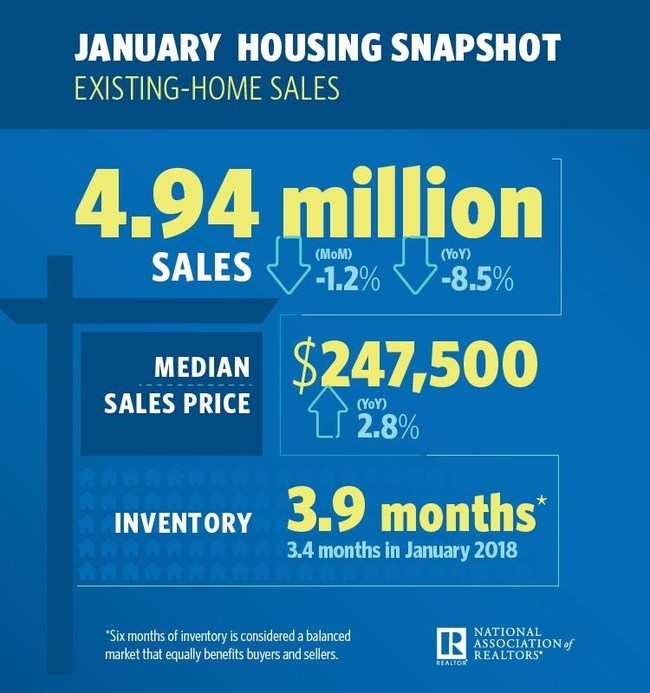 “Decelerated sales and the increases in inventory will work in favor of potential homebuyers, putting them in a better negotiating position heading into the spring months,” said NAR President John Smaby, a second-generation Realtor® from Edina, Minnesota and broker at Edina Realty. “On top of that, low-interest rates will bring an additional $80 per month savings compared to the rates of just a few months ago.”

First-time buyers were responsible for 29 percent of sales in January, down from last month (32 percent), but the same as a year ago. NAR’s 2018 Profile of Home Buyers and Sellers – released in late 20184 – revealed that the annual share of first-time buyers was 33 percent.

Distressed sales – foreclosures and short sales – represented 4 percent of sales in January, up from 2 percent last month and down from 5 percent a year ago. One percent of January sales were short sales.

The National Association of Realtors® is America’s largest trade association, representing more than 1.3 million members involved in all aspects of the residential and commercial real estate industries.