Home showings Increased 73.7 Percent Year Over Year in the Northeast Region, the Biggest Gain in the U.S.

The summer housing market ended much as it began, as buyers again turned out in droves in August, according to data from the ShowingTime Showing Index®. The 61.9 percent year-over-year increase in nationwide showing activity is the largest recorded during the current four-month surge in demand.

Coupled with a lack of inventory and growing buyer demand, there was a marked increase in the average number of showings per listing. The sustained surge has reached historic heights, aided by continued adoption of virtual showings. 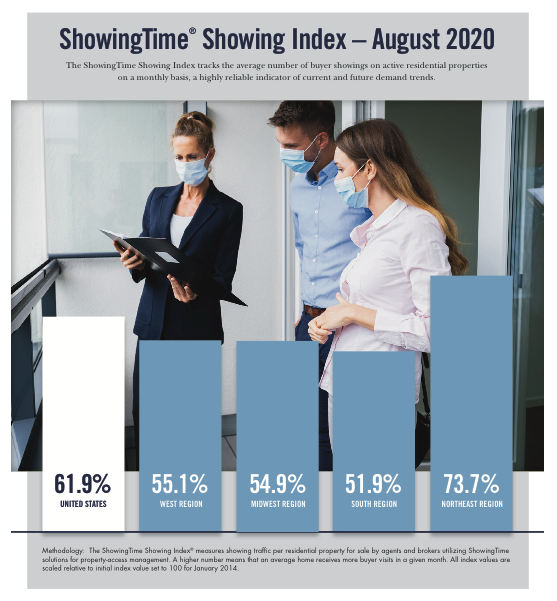 “The trends we’ve been observing the past few months have continued, with buyers competing for fewer listings,” said ShowingTime Chief Analytics Officer Daniil Cherkasskiy. “Normally, real estate activity begins to slow down in the late summer, but this year it peaked in July, August and into September. Only in late September did we begin seeing signs of a seasonal decline.”

The Northeast Region saw the largest gain for the third consecutive month, with a 73.7 percent increase in traffic. The West’s 55.1 percent year-over-year increase came next, followed by the Midwest’s 54.9 percent increase and the South’s 51.9 percent climb.

“If there was any question about the vitality of the market, August’s numbers provide a definitive answer,” said ShowingTime President Michael Lane. “It’s gratifying to know agents, teams and offices using our services have been able to manage this historic demand.”

The ShowingTime Showing Index is compiled using data from more than six million property showings scheduled across the country each month on listings using ShowingTime products and services. The Showing Index tracks the average number of appointments received on active listings during the month.