The average American homeowner thinks their home is appreciating faster than appraisers do. Appraisal values in January were an average of 0.47 percent lower than what homeowners estimated, according to the national Quicken Loans Home Price Perception Index. January was the third consecutive month in which the gap between these data points widened from the previous month. While there is still a small gap between the two opinions, this emerging trend could be a sign that homeowners aren’t aware of recent home value changes. 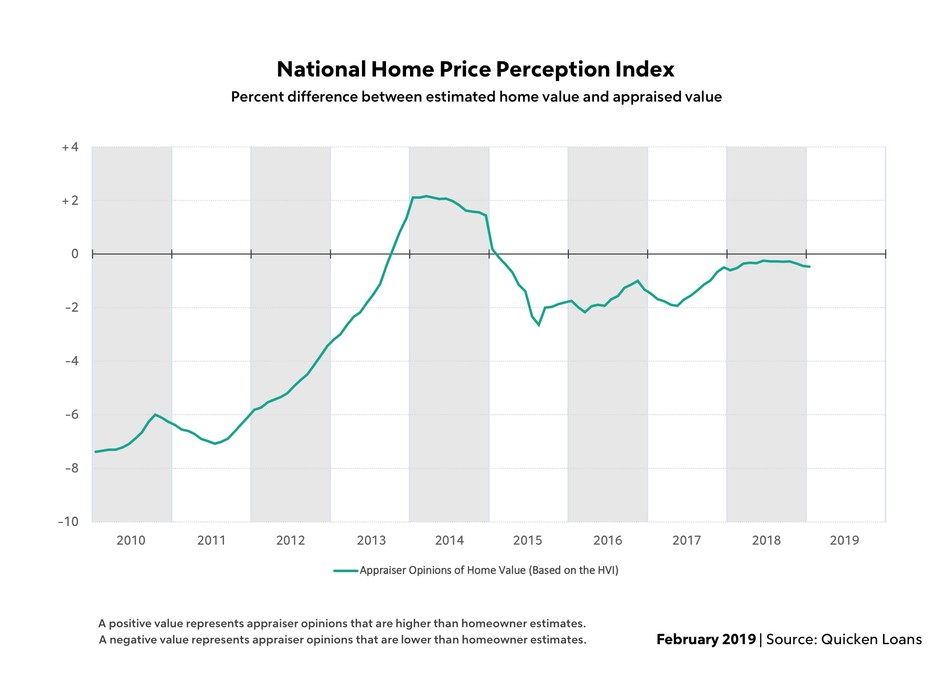 The metro Home Price Perception Index measurements fully shows how perception is changing across the country.  Some of western cities have seen their HPPI values drop as their home value growth slowed.
San Francisco, for example, had average appraisals 2.11 percent higher than expected in
January 2018. One year later, appraisals in the
Bay Area are less than 1 percent higher than what homeowners estimate. All told, two thirds of the
metro areas measured reported average appraisal values higher than what homeowners expected.

“It looks like the [index] is seeing the start of a downward trend, in lock-step with pockets of moderating home values,” said Bill Banfield, Quicken Loans Executive Vice President of Capital Markets. “However, with the national measure still reporting appraisals less than half of a percent lower than expected and with home values in the lowest performing metro area less than 2 percent lower than what homeowners estimated, the housing markets is still in a healthy place.”

Even though homeowners may not have their finger on the pulse of the home value changes, appraisers have recorded fluctuations in select areas. Nationally, however, home values are still marching forward – just at a slower clip than last month. Appraisal values rose 0.65 percent from December to January, according to the National Quicken Loans Home Value Index (HVI). In addition, the index showed healthy annual grow – with appraisal values rising 5.35 percent since January 2018.

The more notable changes to home values were reflected in the regional areas. There was a small monthly dip in appraisal values for homes in the West and Midwest, declining 0.38 and 0.08 percent respectively, and much more subdued annual appreciation in the West and South. These regional adjustments didn’t cause huge ripples across the country, keeping the healthy appreciation that has been displayed as of late.

“While there have been some recent movements in the pace of home appreciation, the housing market is still very strong and is making positive movements across the county,” said Bill Banfield, Quicken Loans Executive Vice President of Capital Markets. “As homes in each market adjust for the rate of price appreciation, buyers and sellers may find that there is more to negotiate – and some potential complications – if the purchase price isn’t supported by the appraised value. The appraised value will be derived from recent, proximate sales, and are the leading indicator for the direction of the local market.”

About the HPPI & HVI

The Quicken Loans HPPI represents the difference between appraisers’ and homeowners’ opinions of home values. The index compares the estimate that the homeowner supplies on a refinance mortgage application to the appraisal that is performed later in the mortgage process. This is an unprecedented report that gives a never-before-seen analysis of how homeowners are viewing the housing market. The HPPI national composite is determined by analyzing appraisal and homeowner estimates throughout the entire country, including data points from both inside and outside the metro areas specifically called out in the above report.

The Quicken Loans HVI is the only view of home value trends based solely on appraisal data from home purchases and mortgage refinances. This produces a wide data set and is focused on appraisals, one of the most important pieces of information to the mortgage process.

The HPPI and HVI are released on the second Tuesday of every month. Both of the reports are created with Quicken Loans’ propriety mortgage data from the 50-state lenders’ mortgage activity across all 3,000+ counties. The indexes are examined nationally, in four geographic regions and the HPPI is reported for 27 major metropolitan areas. All indexes, along with downloadable tables and graphs can be found at QuickenLoans.com/Indexes.