Another analysis found similar results, as well as falling prices in some metro areas, mostly in the Northeast.

A study of home price changes between 2013 and 2018 in North American cities showed a surge in prices, with the 11 largest U.S. cities seeing more than a 50% jump. The research from Point2 Homes is just one more sign that housing affordability is becoming a larger hurdle for more Americans. 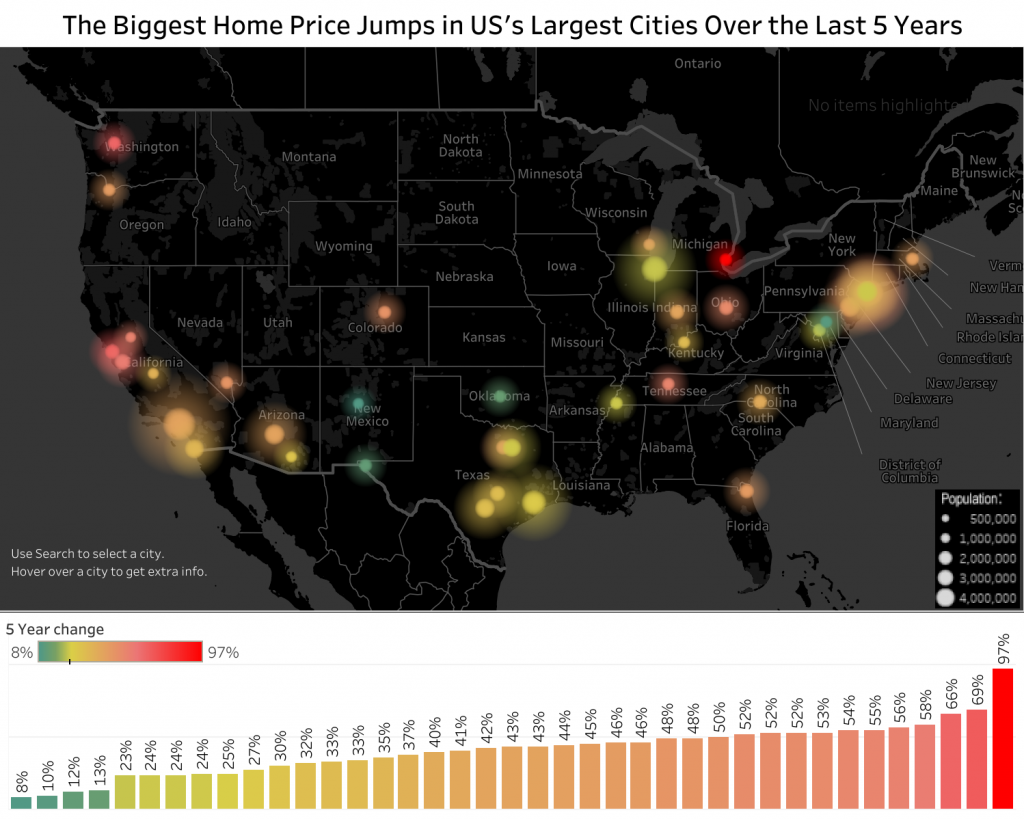 Here are some key findings:

Compared to just five years ago, 40 cities in the U.S., 31 in Mexico, and 10 in Canada have seen significant home price hikes, putting considerable strain on the average homebuyer. With more and more people opting for a connected, urban lifestyle, and with the younger generation’s desire to reduce commute time, demand for urban housing is skyrocketing.

Moreover, according to an analysis by CityLab, geography may play a huge role in a city’s potential for development: cities that do not have enough space to expand once they start developing economically might suffer in the long run.

And usually it is the homebuyers who pay the price, quite literally, because the rising costs of real estate development in tightly-controlled land zones will have a major impact on final home prices, no matter their type.

As a result, housing affordability is becoming increasingly problematic in many cities across North America. While the traditional rule of thumb – that a homebuyer should afford a home if its value is three times or less the annual household income – still holds in some markets, others are far more expensive than that.

To look at one of the most extreme cases, Canadian prospective homebuyers could have bought a home in Surrey, B.C., for around $450,000 (Canadian dollars) in 2013, but they currently need almost double that: $845,500. Vancouver, B.C., follows suit, with a 68% increase in the past five years, and Brampton, Hamilton, and Mississauga, all three cities located in Ontario, are almost at a tie, with increases hovering around 66%.

In the U.S., Detroit stands out, with home prices that have doubled since 2013. For a city in recovery, severely affected by economic setbacks and demographic decline, increasing home prices might just be a sign of a local economy on the mend.

San Francisco saw the second highest jump, with a home price increase close to 69%. The other talent and tech hub on the West Coast, Seattle, boasts the third most significant price gain (66%).

Online lending marketplace LendingTree® released its analysis of how the housing market has changed since 2009.

The study looks at the 50 largest metropolitan areas in the U.S. to see where housing prices have recovered the most since the height of the Great Recession — and where values are still struggling. The study also looks at how income and unemployment rates have changed since 2009.

That study found that housing prices have rebounded from their lows during the Great Recession and are now starting to cool. In many cases, home values have even exceeded their 2006 highs.

LendingTree found that on average, median home values have increased by nearly $50,000 across the 50 largest metros in the United States since 2009. Increasing incomes and falling unemployment rates have likely fueled this increase, the researchers said.

Prices have fallen in four metros since 2009: Hartford, Conn., Chicago, Virginia Beach, Va., and Baltimore. On average, these areas have seen home prices fall nearly $6,700. According to LendingTree, “It is difficult to blame these results on a single factor, but, in many of these areas, a lack of strong employment opportunities and out-of-state migration might play a role.”