There’s an overwhelming uncertainty about the effect the COVID-19 pandemic will have on the US economy. This uncertainty is echoed in the moving industry, where according to our recent survey, over 80% of moving companies are worried about the future of their businesses.

And no wonder: almost three-quarters (74%) of them have already seen moving jobs cancelled, while 72% noticed an overall decrease in business.

Are they right to be worried long term? Just how much business does the moving industry stand to lose due to this pandemic? And how much revenue and how many jobs could be lost in this COVID-19 crisis?

To answer these questions, we looked at how the moving industry fared through the most recent economic crisis in the US: the Great Recession of 2008-2009.

We combined the data of the Great Recession with the most recent projections of unemployment and economic downturn to estimate the impact COVID-19 might have on the future of the moving industry.

Based on the combination of findings from an AMSA-commissioned study of the Great Recession and recent economic projections from Goldman Sachs and Bloomberg’s Survey of Economists, we estimate that the moving industry could lose between $1.5 and $2.5 billion dollars in revenue. That’s between 12.2% and 19.9% of its current revenue, based on America’s Moving and Storage Association’s (AMSA) estimates on how large the moving industry is today.

In addition, the current pandemic-related economic crisis could mean the following for the moving industry:

Based on the drop in the number of people moving during the last recession, the industry could see an estimated 6% to 9% reduction in demand for moving services in 2020.

Lessons for the moving industry from The Great Recession

Last time the US faced a financial crisis of this current magnitude was in 2008, when the subprime mortgage crisis and the failure of financial institutions plunged the country into a recession.

“Taking into account the toll the 2008-2009 crisis took on the moving industry in terms of revenue, number of establishments, jobs, and payroll, based on current economic projections, the toll is likely to be similar this time around.”

According to a related 2012 study of the moving industry in the years of the Great Recession (which we note was commissioned by the American Moving & Storage Association), it took until 2011 for the industry to recover – that’s about four years. “Recovery” as operationalized by this study means “a return to growth in revenue, employment, number of companies in the industry”. 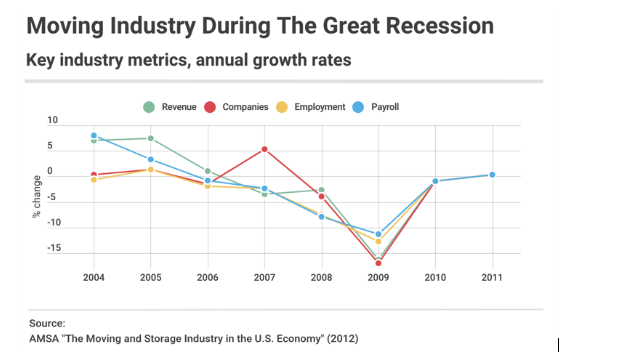 Within the same period, the US recorded a peak unemployment rate of 9.5% and a 4.2% drop in GDP, signaling an extremely difficult time for the economy and the country.

How these industry-specific and broader metrics behaved during the recession of 2008-2009 allows us to estimate what the COVID-19 pandemic may cost the moving industry in 2020.

Predicting the unpredictable about the 2020 crises and beyond

To assess the impact of the COVID crisis on the moving industry, we started with the same two metrics we measured for the Great Recession: change in the GDP and unemployment rate.

Here are the drops in GDP and peak unemployment rates for the Great Recession, followed by Goldman Sachs and Bloomberg’s estimates for the COVID-19 pandemic. 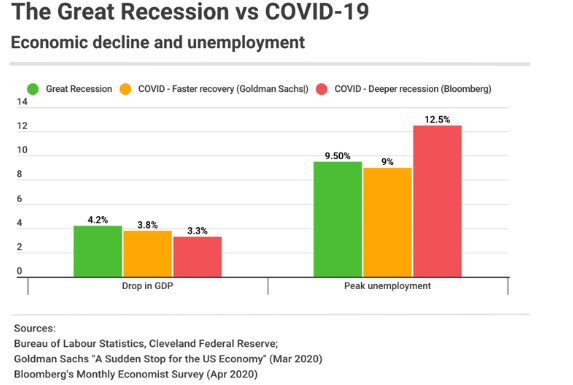 Unlike with the Great Recession, these 2020 figures are limited to three months. (And while some projections are wrong more often than not, that’s all we have to go on so far.)

We took our projections on these metrics from two reputable sources: Goldman Sachs and Bloomberg’s survey of economists. While both predict an approximate 3.5% decline in GDP in 2020, compared to 2019, Goldman Sachs is a lot more optimistic than Bloomberg’s panel when it comes to the unemployment metric.

Armed with these figures, we aimed to answer the following question:

If during the Great Recession the moving industry lost 16.5% of its revenue, what can we expect based on the projections for COVID-related economic crisis?

Taking into account the toll the 2008-2009 crisis took on the moving industry in terms of revenue, number of establishments, jobs, and payroll, based on current economic projections, the toll is likely to be similar this time around. 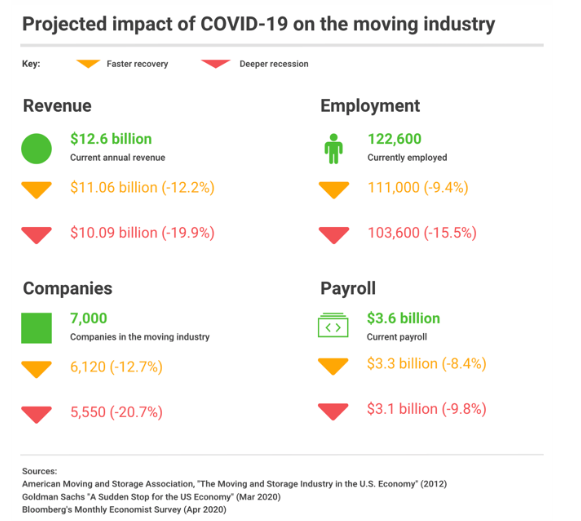 What the moving industry could see going forward.

Beyond the immediate impact, a worrying trend

If the Great Recession is any indication, it could be up to four years before the moving industry rebounds to its previous rates.

The number of people moving in the US every year has been on a steady decline since the mid-90s.31.4 million people moved in 2019 –  almost 1 million fewer than the year before.

The top reasons for moving in 2019, based on our study of over 25,000 moves in 2019, were all for reasons that will be heavily impacted by a crashed economy. It’s difficult to imagine a scenario where forces behind these reasons (e.g., job creation, the housing market) all experience a quick recovery. Last time we were in a recession, the number of people moving dropped almost 10% year-over-year.

Based on current economic projections, we estimate the number of people moving could be between 6% and 9% lower in 2020 than the year before.

Comparing the consequences COVID-19 pandemic will have on the economy to the recession of 2008-2009 is, of course, speculative. And whereas the finance industry seems to be divided over how strongly the coronavirus pandemic will affect the nation’s economy, they seem to agree on one thing: much like the impact of the Great Recession, the impact of COVID-19 will be negative.

Still, at the moment, it’s impossible to rule out either “rapid recovery” or the “deep recession” scenarios. A quick recovery is exactly what some companies in the industry are hoping for.

Ben Cross of University Moving and Storage Co, an agent of the North American Van Lines tells us, “April is trending about 60% down for our corporate business, but we expect that to come back in June.”

He adds, however, that the comeback depends on “whether 100% of the moves that didn’t happen in March, April and May end up moving at all”.

Like many other questions, this one will be answered when the true effect COVID-19 has on the economy, including house sales and jobs creation which are both big drivers of people’s moves in the United States, is revealed.

Until such time, we can anticipate the COVID-19 to have an impact similar to the Great Recession of 2008-2009, while holding out hope it won’t be as profound this time around.